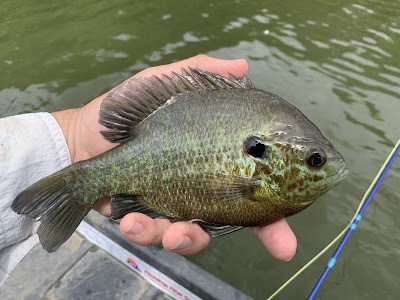 While it felt like I caught the same 7-inch, male bluegill about 30 times, it was still a heck of a morning at Watkins Mill State Park in early June.  There were a couple of streamer eaters but most fish were caught on a small 1/80 ounce jig under an indicator.  I also caught a couple of redear and a 12-inch bass as well.  I also might have caught a natural hybrid too but I’m not sure.  It has some of the markings of a redear but also has some bluegill features as well.  I have caught natural hybrids before that looked a lot like this but they could very well have been redear that were just colored up in a unique way.

All of the fish were caught near breaks in the aquatic vegetation.  At some points in the year, the fish will hide in the cabbage and ambush passers-by.  At this time of the year it seems that they could be looking for bedding areas or actively hunting in clearer water.  Either way, they bent a four weight really well and a lot of fish ended up in my hands.  Watkins Mill is a beautiful place and a good fishery.  While bass and bluegill are pretty plentiful, there are also crappie, catfish, and even hybrid stripers.  The hybrids are getting pretty close to 20 inches and with the lake only being 100 acres in size, a person with some good electronics might be able to locate them and catch a few. 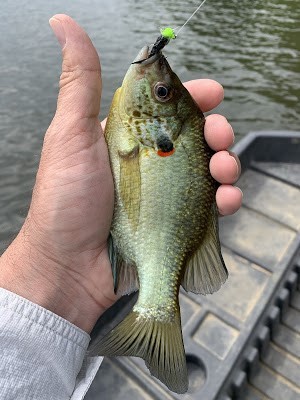 A small redear sunfish, but that bright color on the gill flap sure helps identify the species.

There are few fish in Missouri that are accessible as sunfish.  The sunfish family consists of all bass, bluegill, all crappie, green sunfish, and redear sunfish just to name a few.  These fish can be found in almost any body of water in Missouri.  They are tough enough to survive harsh winters and aggressive enough to take down prey when they have the opportunity.  They tend to reproduce well in Missouri waters which means populations can support themselves without much stocking or intervention.  These characteristics make sunfish plentiful across the state and many times, they are willing to bite a fly as much as anything else. 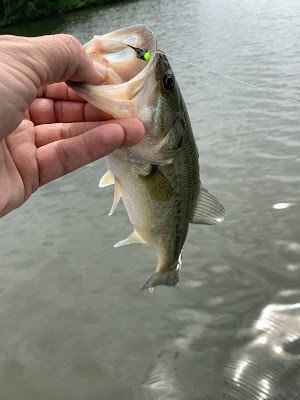 I also managed to catch a 12-inch largemouth bass which was a pleasant surprise.

In fact, I’ve had mornings where flies out-fished conventional tackle and even live bait.  Sunfish have a varied diet which means you should have a variety of flies on hand in order to match the food source that the fish are keying on.  A variety of streamers that imitate baitfish is always good to have for aggressive fish in spring and fall.  In the summer, a surface fly like a popper will work well when fished slowly.  At just about any time of the year, a nymph or jig under an indicator will work with slow or no action at all.  A four weight will work fine for sunfish if you are throwing small flies but a three weight is more fun because they will really put a bend in that setup.  If you’re targeting larger bass, a five to an eight weight can be used depending on the size of the flies and the size of fish you are targeting.  No matter what you target or what you throw, catching sunfish on a fly is fun for novices and veterans alike…and you probably won’t have to look very hard to find these tenacious species.

You can follow Tyler Dykes at his social channels below:

Too many fish and not enough time

Posted On May 9, 2016 ~ 0 Comments
May is the month fishermen dream about all year long. The action heats up across the state as many fish species begin their annual spawn.…

Posted On September 24, 2018
Hunting in hot weather comes with issues of meat preservation. Minimizing the time between when you take your shot and when you cool your kill…

Posted On March 5, 2018
Citizens often wonder how their voice can be heard when it comes to helping set the direction of conservation and natural resource management in Missouri.… 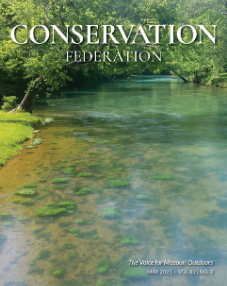