Johnson Shut-Ins State Park is just one of Missouri’s 88 state parks and historic sites depending on the renewal of the Parks, Soils and Water Sales Tax.

When you head to the ballot box on November 8th, you may have some tough decisions to make. Thankfully, there is a no-brainer on the ballot for everyone who appreciates Missouri’s natural resources and state park system. Amendment 1, if passed, will renew the Parks, Soils and Water Sales Tax for another 10 years, thus ensuring our state parks remain free for all visitors, our waters flow clean and our soil stays on the landscape.

Since first enacted in 1984, Missouri’s 1/10 cent Parks, Soils and Water Sales Tax has been approved four times by Missouri voters. In 2006, the last time the sales tax was renewed, over 70 percent of voters approved it. Half of the sales tax revenue goes to support Missouri’s state park system and half goes to soil conservation and water quality programs.

The Parks, Soils and Water Sales Tax in a unifying measure, bringing together diverse individuals, organizations and industries from across all political affiliations working together to ensure this important funding stream continues. The Citizens Committee for Soil, Water and State Parks was formed to guide the task of renewing the program. The makeup of the Committee proves how widely supported this program is. Missouri Farm Bureau, The Conservation Federation, Missouri Corn Growers Association, The Nature Conservancy, Missouri Soybean Association, and the Missouri Parks Association are just a few of the many. So in the midst of all the political fighting and badmouthing we are constantly subjected to on television and radio, Amendment 1 is something for everyone, regardless of party, to support. Because it so strongly supported and there is no organized opposition, you may not have heard much about it. That doesn’t mean the Parks, Soils and Water Sales Tax is not extremely important.

In 1982, Missouri had the second highest rate of erosion in the nation, losing 10.75 tons per acre annually. Over the past 30 years, $660 million has been provided to Missouri agricultural landowners to implement 220,000 conservation practices. As a result of these conservation efforts, Missouri has reduced soil loss more than any other agricultural state in the nation. More than 177 million tons of soil have been saved, soil that would have harmed Missouri’s streams, lakes and rivers.

On November 8th, Missouri voters have the opportunity to renew one of the state’s most successful programs. If you care about your state parks, the soil on the ground and the water in our lakes, rivers and streams, then I hope you will join me in voting yes on 1.

See you down the trail….

Posted On October 15, 2018
Theodore Roosevelt, John Muir and Henry David Thoreau are well-known giants of the early American conservation movement. They were responsible for enormous advancements in citizen…

Whitetail Rut about to Break Loose

Posted On November 2, 2015 ~ 0 Comments
The whitetail rut is upon us. Bucks are running ridges and field edges in search of receptive does. This is the highlight of deer season…

Posted On April 10, 2017
Conservation is too often taken for granted in Missouri. A lot of that has to do with how incredible our forest, fish and wildlife resources… 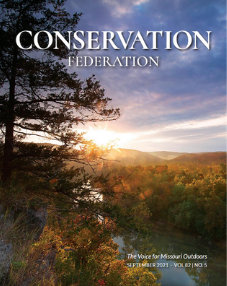