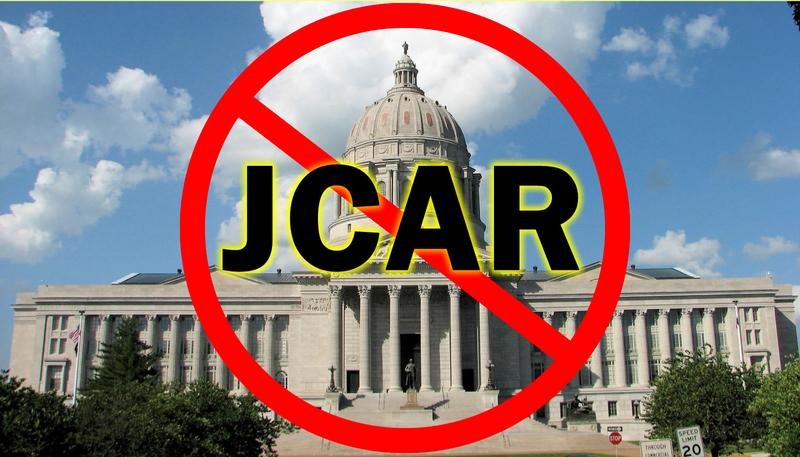 There are three branches of government – Legislative (makes the law), Executive (carries out the law), and Judicial (interprets the law). Beautifully simple, and with inherent checks and balances, the primary way our democratic system of government works.

Enter the Joint Committee on Administrative Rules (JCAR). This statutorily created committee is charged with reviewing all rules promulgated by state agencies. The JCAR looks to determine that rules are 1) made under statutory authority, 2) not in conflict with state law, and 3) are not arbitrary and capricious as to create a substantial inequity or burden. Generally, no proposed rule can become effective without JCAR review, which has the authority to disapprove a rule in whole or in part. If JCAR disapproves, the rule is put on hold until the legislature can affirm by resolution a JCAR recommendation.

Sounds pretty good, eh? Legislators will tell you it’s all about oversight, accountability, and prevention of (here it comes) government over-reach. What it’s really about is control over agencies, circumventing the Governor’s authority, and tilting the scales away from a transparent, public rule-making process. And if that’s not enough, a new House Joint Resolution (HJR 100) proposes we expand this authority and place the whole kit and caboodle in the state constitution. If successful, even Department of Conservation (MDC) rules would become subject to the will of JCAR review and actions.

In a recent article in the Missouri Times, Committee Vice-Chair Rep. Nick Schroer said, “I see JCAR as a quasi-judicial committee.” Therein lies the rub. I prefer judicial review coming from the judicial branch of government, not a 10 member, majority-weighted JCAR. Looks more like Quasimodo to me.

Now if legislators were objective thinkers and pure of heart, I say with a smirk, I might not be overly concerned. But under the provisions of HJR 100, there are plenty of weasel words and vagaries that could be, will be used as grounds to determine a rule is not in the public interest.

So, don’t like those deer hunting regulations? Want permit prices cheaper? Don’t like rules about feral hogs, CWD, or captive cervid operations? Here’s the chance the legislature has wanted. This committee will be powerful and agencies will bend to its resolve. Are you a special interest group unhappy with rules and regulations? Here’s another entry point for outside influencers to get what they want, away from the public eye of an open rulemaking process. Don’t like Conservation Commission making rules? This will gut that authority.

Nationally, there are a lot of problems with these types of administrative committees, starting with constitutionality and questions about how delegating rulemaking to an administrative committee violates the principles of separation of powers. Every agency should be concerned. To be fair, it can be argued that Conservation Commission rulemaking already violates that principle. Call me hypocritical, I get it, but this deviation from the norm has worked extremely well, and there is a reason why. A scholarly friend, Dr. Christine Thomas, of the University of Wisconsin-Stevens Point, when writing about Wisconsin’s equivalent to the Commission said, “(The board are) the only people that can stand up for the resource with no tie to money, contributions, gifts or election. And every decision has to be made in full view of the public.”

For me, JCAR, as an inform and advise entity might be acceptable, but as a constitutional, quasi-branch of government with veto authority? That’s too much power in the wrong place and with the wrong people.

Posted On July 11, 2016 ~ 0 Comments
It sounds like the beginning of a joke; so three guys are fishing a river. One is from Iowa, one is from Kansas and one…

Bass are Biting at Lake of the Ozarks

Posted On May 1, 2015 ~ 0 Comments
Trying to understand directions on Lake of the Ozarks is like cracking some sort of secret code. There’s always a mile marker and the…