The Conservation Federation of Missouri honored citizen conservationists and natural resource professionals with the Conservation Achievement Awards at our 84th Annual Convention.  Please join us in congratulating the award winners!
Read their stories below. 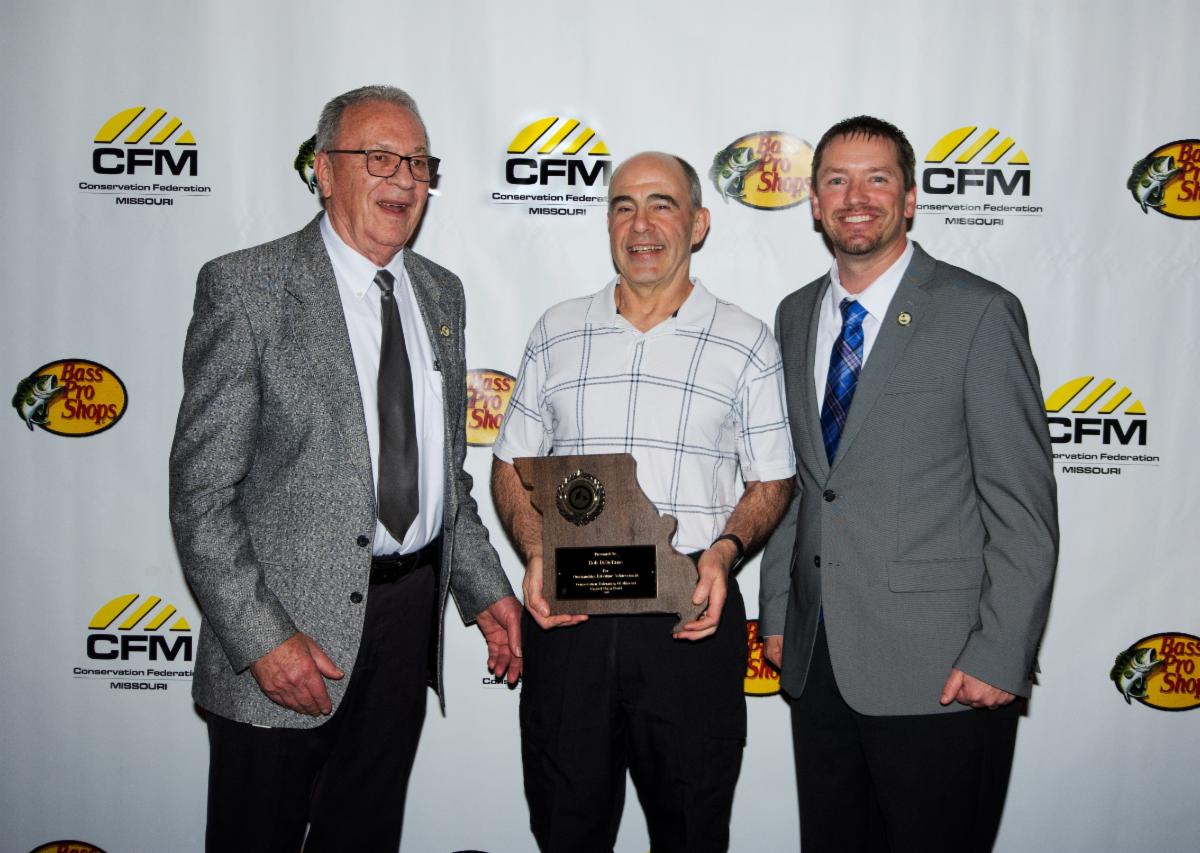 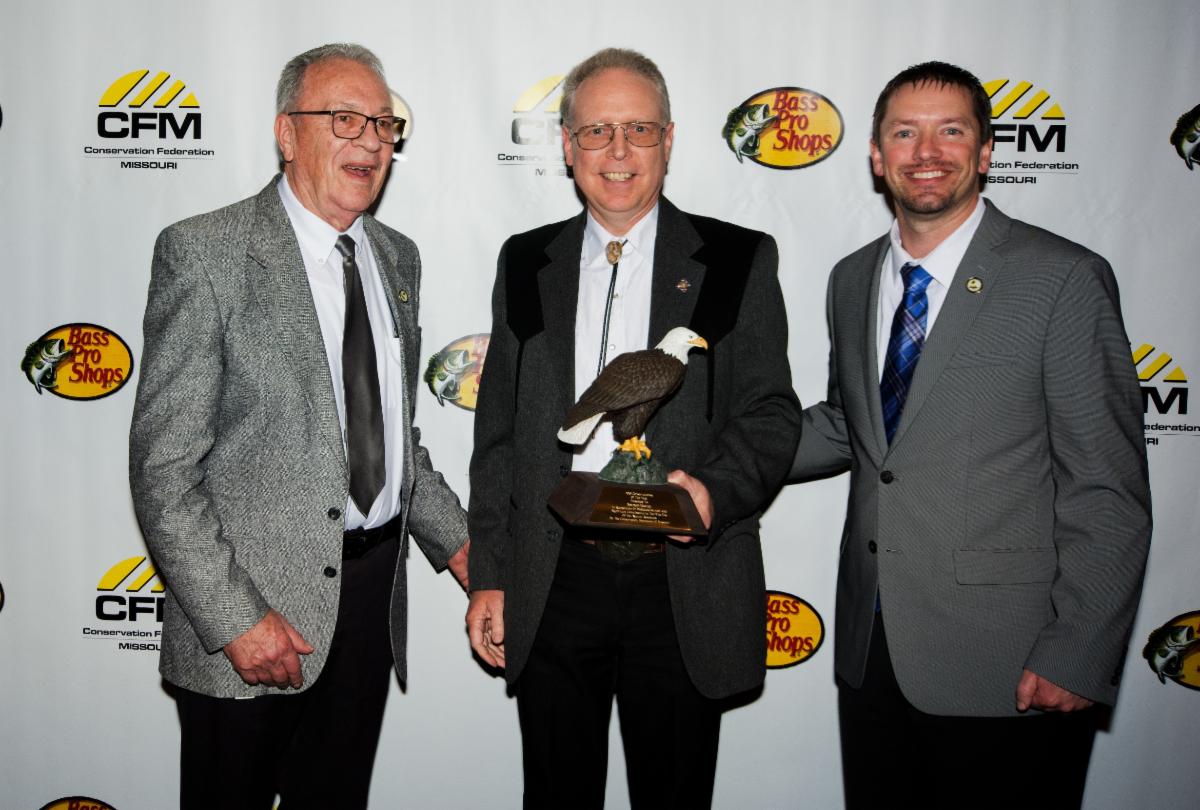 Norman Murray (center) receives the Conservationist of the Year Award.

Bob is highly regarded as a leader in the international crayfish research community because of his efforts and involvement in crayfish conservation. He is a sought-after collaborator by many scientists because of his expertise, work ethic, and dedication to high-quality science. He draws on this vast network of connections to address important ecological and management questions. When Bob speaks, people listen. To some, Bob is a role model of science, but to many others, he is a role model of life.

Conservationist of the Year:  Norman Murray

Norman Murray’s work has improved Missouri’s critically imperiled grassland systems, provided local, state and national leadership related to grasslands, leadership and direction with the Comprehensive Conservation Strategy, Missouri’s Wildlife Diversity Program and the proposed Recovering Americas Wildlife Act (RAWA). Within the Missouri Department of Conservation, Norman was asked to lead the organizational review to help set the future direction and overall structure of how the Department of Conservation implements conservation here in Missouri. Norman has provided key guidance and conservation leadership within the conservation family and provided leadership for MDC’s Agency reorganization, the strategic plan, priority geographies and worked to increased wildlife populations on many committees and workgroups. Many others seek Norman out to be a part of their work teams, interview panels, and assignments. Thanks in part to his solid communication skills, Norman is an effective leader and supervisor that provides encouragement, direction and a willingness to consider opposing points of view during the decision-making process.

For almost four decades, Jim has been combining his passion for wildlife, wild places, and environmental issues, with high-quality video production. For over 20 years, Jim was the lead producer for the Missouri Department of Conservation’s Missouri Outdoors program where he produced over 100 story segments. These included Lewis & Clark in Missouri, The Spirit of Conservation and 20 years: A Stream Team Story. Jim has recently taken on the position of River Advocate for the Missouri Coalition for the Environment. He has dedicated his life’s skills as a passionate communicator, creating public awareness for the importance of natural resource conservation.

Corporate Conservationist of the Year:  CZ-USA

CZ believes in giving back to youth and shooting sports across the country. They recently chose four youth to set a world record for the most amount of clay targets hit over a 12 hour period. They had students submit essays on why they should be selected to break the world record. They then had them shoot targets, and combined their shooting scores with their essays to select the two boys and two girls to try and set the record. The record was indeed broken, where each shooter shot almost 4,000 rounds over a 12 hour period!

Rebekah has been trained to use the Enviro-Scape model to educate the Christian County community about stormwater runoff. She attended a training weekend for the Green Leadership Academy for Diverse Ecosystems in 2012 and has since been active in recruiting and mentoring students for GLADE, and became co-director of the week-long nature camp in 2019. With GLADE, she has assisted in multiple community grant projects such as creating a plastic bottle recycling program at the Ozark High School, helping build a native rain garden at the elementary school, and maintaining the Ozark Middle School Outdoor classroom.

Jason and his staff implemented The 2019 Pioneer Forest Management Plan. This 137-page document utilizes comprehensive Geographic Information Systems along with the identification and description of new forest reserves, ecological management areas, and recreation and trails in the forest. Jason led a tour of fifteen German, Swiss, and Austrian ProSilva foresters interested in uneven-aged silviculture. Pioneer foresters have now been invited to tour European forests and to continue these discussions. Jason’s leadership for the management program at Pioneer Forest is a tribute to the use of conservation-based forest management in the Missouri Ozarks and a model for others interested in similar conservation-based values to emulate.

In 2019, OTA volunteers donated 9,817 hours to develop, maintain, preserve, promote, and protect the rugged, natural beauty of the Ozark Trail, Missouri’s premier long-distance backcountry National Recreation trail. In the fall of 2019, OTA volunteers were able to complete the final half-mile of trail linking the Ozark Trail’s Blair Creek section to two State Parks. This new trail connects and expands the Trail’s reach to strategically important destinations and trailheads. It also affords opportunities for trail enthusiasts to enjoy the scenic Current River valley. This beautiful section of trail adds indisputable value to the OT as a trail of national significance.

As Division Chief, Brian has helped guide the division through the development of the Missouri Conservation: Design for the Future Strategic Plan. As Fisheries Division Chief, Brian represents Missouri at the national level serving in the Mississippi Interstate Cooperative Resource Association (MICRA). During his time as chair, this group has worked on tackling the invasive carp issue that plagues the big rivers across the Midwest. Making annual trips to Washington DC to meet with Missouri’s congressional delegation along with legislators from other states has paid off. There is currently legislation moving its way through Congress that will bring additional funding to the Mississippi River Basin states to continue the fight.

Sherry has had a long and productive career that has boldly advanced fisheries science, engaged and empowered citizen scientists, and set a level of professionalism that is second to none. Under her leadership, the Stream Unit has led efforts to work in prioritized watersheds statewide, coordinating watershed inventory efforts with regional staff and enhanced training. Sherry’s work on a national scale with the National Conservation Leadership Institute has allowed her to share her leadership skills with conservation professionals across the nation. Her leadership with the Conservation partnership meeting here in Missouri has highlighted her talents as a conservation leader.

Anna is an avid community volunteer, an outstanding student, an accomplished naturalist, and a committed conservationist. Anna attends Macalester College in Saint Paul, Minnesota, where she is a junior majoring in Environmental Studies. During her sophomore year, she lived in The EcoHouse, a sustainable living project on campus exploring green-living lifestyles and work with community partners to develop better resources for sustainable lifestyles. In the summer of 2019, Anna was a nature educator and interpreter at Roaring River State Park where she used her skills to spark interest in the Ozarks and the changes facing the area’s vulnerable natural resources. Anna’s positive attitude, infectious personality, commitment to excellence, love for the outdoors and people, exceptional communication skills and passion to shape the future combine to make her an outstanding youth conservationist.

With 22 Missouri Prairie Foundation (MPF) properties totaling more than 3,250 acres spread throughout the state to oversee, Jerod is presented every day with many logistical and planning challenges, but he is extremely efficient at planning ahead to ensure that all prairie burns, invasive species control work, grant obligations, and reporting are completed on schedule.  Jerod’s work on behalf of wildlife conservation extends beyond MPF prairies as he reaches out to private landowners through workshops he presents to educate about the importance of providing habitat and incorporating it into farming practices. Jarod’s knowledge and enthusiastic personality assure that his workshops are always filled to capacity and he reaches many with his message about ways to implement a diversity of wildlife habitats on private land.

Representative Tracy McCreery has been a longtime supporter of conservation and the outdoors. She represents part of St. Louis County (District 88) in the Missouri House of Representatives. Tracy is an instrumental piece of the House Committee on Conservation and Natural Resources. During the last session, she voiced her approval and support for the dedicated conservation sales tax in Missouri. She volunteers for many organizations within her community and has been a big sister with Big Brothers Big Sisters of Eastern Missouri.

Senator Mike Bernskoetter championed the Poaching legislation during the first regular session of the 100th General Assembly. He took the oath of office in January 2019, to serve the residents of the 6th Senatorial District. He is the current chairman of the Agriculture, Food Production and Outdoor Resources Committee. Before being elected to the Missouri Senate, Sen. Bernskoetter served as the representative for the 59th District in the Missouri House of Representatives.

Posted On February 7, 2019
Those interested are encouraged to submit applications for the 2019 Governors youth turkey hunt that will be held 4/5-7/19 The Governors Youth Turkey Hunt has…

Posted On August 2, 2018
Join the Conservation Federation of Missouri for our 12th Annual Sporting Clays Classic which will once again be held at River Hills in Boonville on… 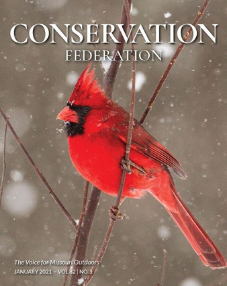